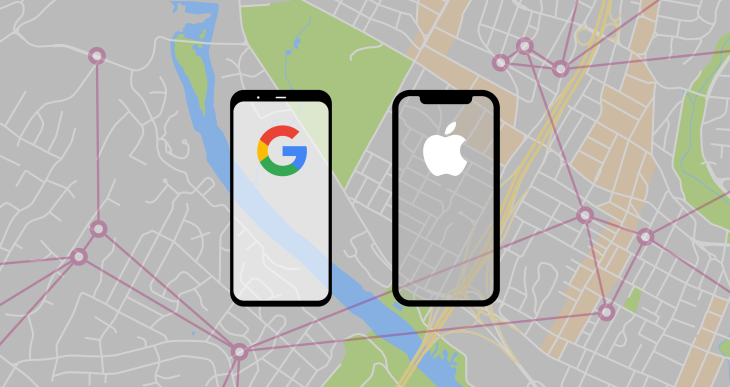 In a rare collaboration, the companies plan to add new software to devices to help track down people who may have been infected.

Apple and Google have announced they are working together to create contact tracing technology aimed at slowing the spread of coronavirus.

In a rare collaboration, the two companies – whose operating systems power 99% of the world’s smartphones – plan to add new software to devices to make it easier to track down people who may have been infected with COVID-19.

To be effective, the system would require millions of people to opt into the system and trust the technology giants’ safeguards.

Under the plan, smartphones with the contact tracing technology will emit unique Bluetooth signals. Phones within about 6ft can then record anonymous information about their encounters.

People who test positive for coronavirus can opt to send an encrypted list of phones they came near to Apple and Google, which will trigger alerts to potentially exposed users to seek more information.

Public health authorities would need to confirm that a person has tested positive for COVID-19 before they can send on the data.

Experts warn that any opt-in system would have limited uptake and any opt-out system would be a huge risk to people’s privacy.

Apple and Google have attempted to explain how their contract-tracing technology will work, but experts are still questioning if it could be effective in reducing infections.

The technology will enable people to find out if they have been in close proximity with someone later diagnosed with COVID-19 based on Bluetooth signals between their smartphones.

Being able to warn people early about potential transmission of the coronavirus is crucial to tackling the pandemic because people are believed to be at their most contagious before symptoms develop.

But experts have raised concerns about the rare collaboration between companies whose mobile operating systems are run on 99% of the world’s smartphones.

The companies say their system will use Bluetooth to ping out signals to other smartphones which are near by, and the smartphones will create a log of all of the other devices they come near to.

This log will protect the identities of these smartphones by randomising the identifiers each of them uses and changing them every 15 minutes.

If users choose to share this information with public health authorities then they can be alerted if any of those other devices belonged to someone who was diagnosed with COVID-19.

Over the coming months the companies say the contact-tracing feature will be added to the underlying iOS and Android operating systems. Any positive matches would prompt users to download their relevant public health app.

Accessing this data, which will only happen if users choose to share it, will be limited to public health authorities as recognised by the national governments where the companies operate.

But there are significant issues with this model.

Security expert Professor Ross Anderson, of the University of Cambridge, warned: “If the app is voluntary, nobody has an incentive to use it, except tinkerers and people who religiously comply with whatever the government asks.”

And if the public health authority apps were compulsory, then “the incentive to cheat will be extreme” as human nature will drive people to adapt to the constraints imposed on them by the system, Prof Anderson added.

The privileges which any compulsory app could give people – for example, if potentially it offered immunity certification — might also introduce dangerous incentives, such as some people trying to contract the virus on purpose.

Another significant issue would be people falsely claiming to have contracted the virus in order to send false alerts to others.

Professor Anderson wrote: “Anyone who’s worked on abuse will instantly realise that a voluntary app operated by anonymous actors is wide open to trolling.

“The performance art people will tie a phone to a dog and let it run around the park; the Russians will use the app to run service-denial attacks and spread panic; and little Johnny will self-report symptoms to get the whole school sent home.”

Security expert Moxie Marlinspike, who created Signal Messenger, warned on Twitter that were numerous ways in which malicious actors could begin to troll the system and people whose devices were near their own.

To tackle this, the companies say they are working with public health authorities to provide the validation for any diagnoses.

But for many people getting a diagnosis simply is not possible.

Sky News has revealed the national coronavirus testing centre is only conducting 1,500 tests a day – significantly short of the 100,000 the government was aiming for.

With such a limited number of cases being flagged up by official testing system, Apple and Google say that public authorities may need to use another method to identify cases. It is not clear what that method would be.

Across the world, governments, and health authorities are working together to find solutions to the COVID‑19 pandemic, to protect people and get society back up and running. Software developers are contributing by crafting technical tools to help combat the virus and save lives. In this spirit of collaboration, Google and Apple are announcing a joint effort to enable the use of Bluetooth technology to help governments and health agencies reduce the spread of the virus, with user privacy and security central to the design.

As part of this partnership Google and Apple are releasing draft technical documentation:

All of us at Apple and Google believe there has never been a more important moment to work together to solve one of the world’s most pressing problems. Through close cooperation and collaboration with developers, governments, and public health providers, we hope to harness the power of technology to help countries around the world slow the spread of COVID‑19 and accelerate the return of everyday life.