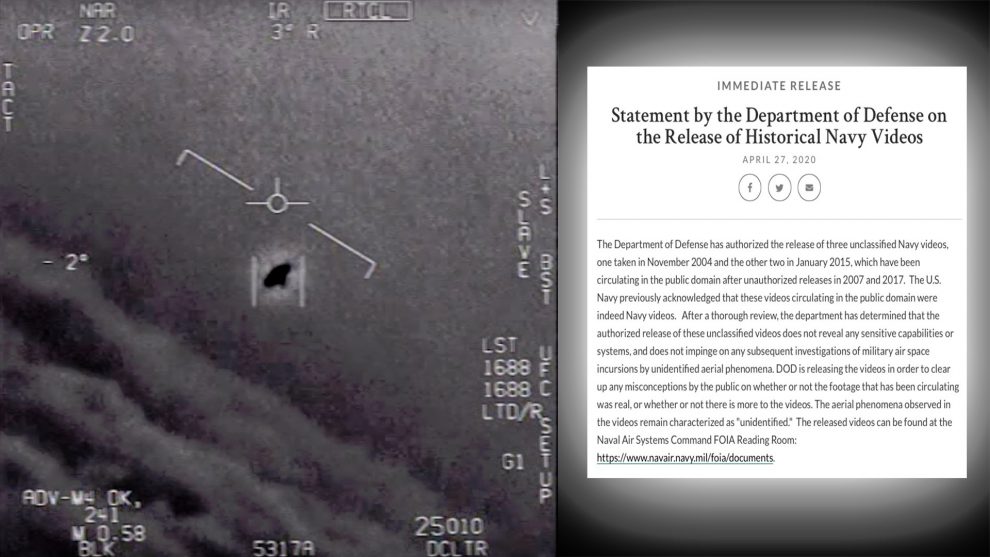 One of the videos shows an incident from 2004, and the other two were recorded in January 2015, according to Sue Gough, a Defense Department spokeswoman. The videos became public after unauthorized leaks in 2007 and 2017, and the Navy previously verified their authenticity.

“After a thorough review, the department has determined that the authorized release of these unclassified videos does not reveal any sensitive capabilities or systems, and does not impinge on any subsequent investigations of military air space incursions by unidentified aerial phenomena,” Gough said.

The 2004 incident occurred about 100 miles out in the Pacific, according to The New York Times, which first reported on the video in 2017. Two fighter pilots on a routine training mission were dispatched to investigate unidentified aircraft that a Navy cruiser had been tracking for weeks.

The Navy pilots found an oblong object about 40 feet long hovering about 50 feet above the water, and it began a rapid ascent as the pilots approached before quickly flying away. “It accelerated like nothing I’ve ever seen,” one of the pilots told The Times.

The pilots left the area to meet at a rendezvous point about 60 miles away. When they were still about 40 miles out, the ship radioed and said the object was at the rendezvous point, having traversed the distance “in less than a minute,” the pilot told The Times.

The two other videos of incidents in 2015 include footage of objects moving rapidly through the air. In one, an object is seen racing through the sky and begins rotating in midair.

“Dude, this is a f–king drone, bro,” a pilot exclaims on the video. Another person says “there’s a whole fleet of them.”

“They’re all going against the wind. The wind’s 120 knots to the west. Look at that thing, dude!” the first person says. “It’s rotating!”

In the other 2015 video, an object is shown from above speeding over the ocean, prompting the pilot to excitedly remark, “What the f–k is that?”

Five Navy pilots who spotted the objects in 2015 told The Times in 2017 that they had a series of interactions with unidentified aircraft during training missions in 2014 and 2015 along the East Coast from Virginia to Florida. The episodes prompted the Navy to clarify how pilots should report experiences with “unidentified aerial phenomena,” which had been studied under a Pentagon program from 2007 to 2012.

Gough, the Pentagon spokeswoman, said the department was formally releasing the videos to address questions about their veracity.

“DOD is releasing the videos in order to clear up any misconceptions by the public on whether or not the footage that has been circulating was real, or whether or not there is more to the videos,” Gough said. “The aerial phenomena observed in the videos remain characterized as ‘unidentified.'”