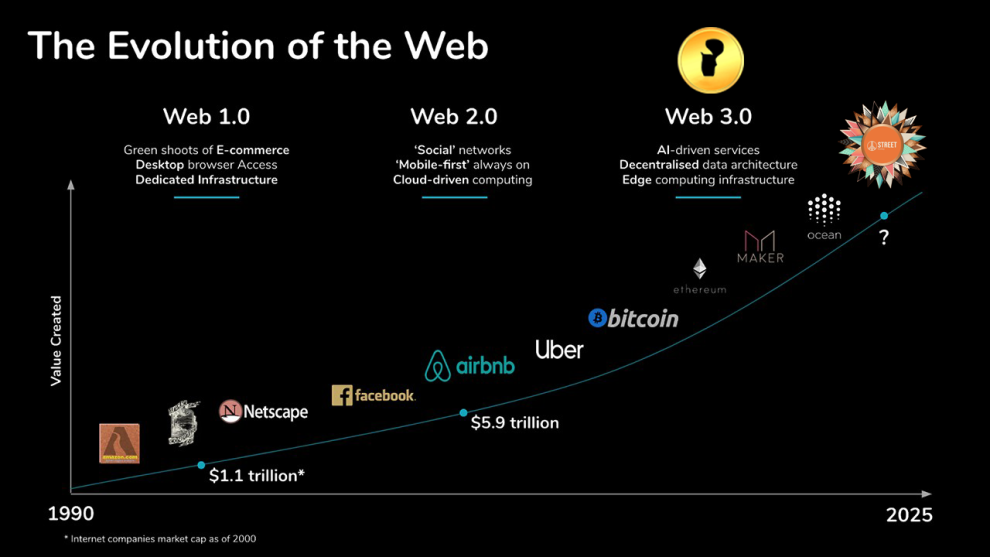 The Internet has changed dramatically since its inception. From Internet Relay Chat (IRC) to modern social media, it has become a vital part of human interactions – and continues to evolve.

Web 3.0 is the next generation of Internet technology that heavily relies on the use of machine learning and artificial intelligence (AI). It aims to create more open, connected, and intelligent websites and web applications, which focus on using a machine-based understanding of data.Through the use of AI and advanced machine learning techniques, Web 3.0 aims to provide more personalized and relevant information at a faster rate. This can be achieved through the use of smarter search algorithms and development in Big Data analytics.

Current websites typically have static information or user-driven content, such as forums and social media. While this allows information to be published to a broad group of people, it may not cater to a specific user’s need. A website should be able to tailor the information it provides to each individual user, similar to the dynamism of real-world human communication.

Computer scientist Tim Berners-Lee, the inventor of the World Wide Web, explained this idea of a Semantic Web in 1999:

I have a dream for the Web [in which computers] become capable of analyzing all the data on the Web – the content, links, and transactions between people and computers. A “Semantic Web,” which makes this possible, has yet to emerge, but when it does, the day-to-day mechanisms of trade, bureaucracy, and our daily lives will be handled by machines talking to machines.

In Web 3.0, an ocean of information will be available to websites and applications, and they will be able to understand and use that data in a way that is meaningful to the individual user.

A brief history of the evolution of the Internet

Websites and web applications have changed dramatically over the last decades. They have evolved from static sites to data-driven sites that users can interact with and change.

The original Internet was based on what is now known as Web 1.0. The term was coined in 1999 by author and web designer Darci DiNucci, when distinguishing between Web 1.0 and Web 2.0. Back in the early 1990s, websites were built using static HTML pages that only had the ability to display information – there was no way for users to change the data.

That all changed during the late 1990s when the shift toward a more interactive Internet started taking form. With Web 2.0, users were able to interact with websites through the use of databases, server-side processing, forms, and social media. This brought forth a change from a static to a more dynamic web. Web 2.0 brought an increased emphasis on user-generated content and interoperability between different sites and applications. Web 2.0 was less about observation and more about participation. By the mid-2000s, most websites made the transition to Web 2.0.

When looking at the history of the Internet, the evolution of a more semantically intelligent web makes sense. Data was first statically presented to users. Then users could interact with that data dynamically. Now all of that data will be used by algorithms to improve user experience and make the Web more personalized and familiar.Web 3.0, while not fully defined, could leverage peer-to-peer (P2P) technologies like blockchain, open-source software, virtual reality, Internet of Things (IoT), and more.

Currently, many applications are limited to run only on one operating system. Web 3.0 could enable applications to be more device-agnostic, meaning they would be able to run on many different types of hardware and software without any added development costs.

Web 3.0 also aims to make the Internet more open and decentralized. In the current framework, users have to rely on network and cellular providers that surveil the information going through their systems. With the advent of distributed ledger technologies, that soon might change, and users could take back ownership of their data.

What makes Web 3.0 superior to its predecessors?

Web3 Foundation founder and President Dr. Gavin Wood discusses the ethos and vision behind Web 3.0 and proposes the Web 3.0 Technology Stack as a way to measure our progress.

This is the foundation of the Web3 technology stack, consisting of how nodes communicate and how they can be programmed at the lowest level.

This layer provides the ability to distribute and interact with data.

Zero/low trust interaction protocols – A protocol describing how different nodes can interact with each other and trust computation and information coming from each of them. Most cryptocurrencies, such as Bitcoin and ZCash, meet the definition of a Zero/low trust interaction protocol – they describe the rules necessary for a node to follow to participate in the protocol.

Data distribution protocols – Protocols describing how data is distributed and communicated amongst the various nodes in a decentralized system. Examples include IPFS, Swarm and BigchainDB.

Transient data pub/sub messaging – Protocols describing how data which is not meant to be permanently stored, such as status updates, is communicated and how nodes are made aware of its presence. Examples include Whisper and Matrix.

This layer enhances the capabilities enumerated in Layer 1, by allowing functionality such as increased scaling, encrypted messaging, and distributed computing.

State channels – A way for a blockchain to increase scalability by having nodes communicate with each other off-chain, by “opening” and “closing” channels on the main chain, and writing only initial and final results, instead of each state transition being recorded on the chain. Examples include Bitcoin’s Lightning Network and Ethereum’s Raiden Network.

Plasma protocols – Plasma is another way of increasing scalability by creating a “tree” of blockchains, with the main chain being the root of the tree, and “child” blockchains interacting with higher-level chains as little as possible. Examples include Loom’s PlasmaChain and OmigeGO Plasma.

Encrypted storage – The user of cryptography to mathematically encrypt and decrypt data, both at-rest (i.e., stored on a specific computer) and in-motion (i.e., being transferred from one computer to another).

Heavy computation – Providing a way to allow computation to be spread amongst many computers as well as prove that the computations were performed correctly. Examples of this include Golem and TrueBit on Ethereum.

Distributed secret management – Allowing information to be accessed only by authorized parties, including complex scenarios such as “decrypting this information requires all six signers to use their key” or “any 5 of 7 signers must agree”. Examples include Parity Secret Store.

Oracles – A way to inject off-chain data (such as weather results or stock prices) onto a blockchain, generally for use by smart contracts.

This is the layer of human-readable languages and libraries that allow developers to create programs at the proper level of abstraction.

Protocol-extensible developer APIs & languages – There are a variety of languages which can be used to develop applications without dealing with actual bytecode, such as Solidity and Vyper (Ethereum), Plutus (Cardano), and Rust (Substrate). Additionally, there are a variety of frameworks available to make it easier to develop applications interacting with a blockchain, such as ethers.js, web3.js, and oo7.js.

The top level of the stack, this includes the ability for a general user – not developer – to interact with one or more blockchains.

Protocol-extensible user-interface cradle (“browser”) – A program which a user would use to interact directly with the blockchain without needing to know implementation details (as a developer might). Examples would include Status, MetaMask, or MyCrypto.